Rohit Sharma has been dismissed by Shane Watson and brilliantly caught by Steven Smith during Day Five of the fourth Test between India and Australia. Rohit played at one outside the off-stump on 39 and Smith dived to his left at first-slip to take a magnificent catch. It was a brilliant catch after Shaun Marsh had dropped a simple chance of Murali Vijay at cover.

Rohit played out 90 balls and scored 39. He was in decent touch, though he struggled quite a bit in the middle. India are chasing 349 for victory and are currently 104 for two after lunch. A victory looks unlikely here and they have Virat Kohli and Murali Vijay in the middle. It would not be an easy chase as the ball is turning and Nathan Lyon is in play.

Earlier on Day One, Australia won the toss and chose to bat first on a good looking wicket. The only change in their team was Mitchell Starc replacing Mitchell Johnson. India made four changes to their team. MS Dhoni’s retirement allowed Wriddhiman Saha to don the gloves. Suresh Raina, Rohit and Bhuvneshwar Kumar came in place of Cheteshwar Pujara, Shikhar Dhawan and Ishant Sharma. Rahul managed to hold on to his spot. Australia scored 572 for two declared and in reply Virat Kohli and KL Rahul hit centuries. India scored 475. In reply, Australia declared on 251 for six, leaving India with a target of 349 on the last day. 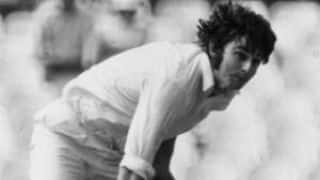