Warner backed Lyon to spell trouble for Indian batsmen again, with six of them being right-handers.

Opener David Warner, whose twin centuries took Australia to a commanding lead of 363 runs at the end of day four of the first Test against India, said that team-mate Nathan Lyon holds the key for the hosts going into final day of play as the Adelaide Oval pitch offers the off-spinner good purchase.

The Adelaide pitch, which saw 12 wickets fall on the first three days, has deteriorated enough to see 10 wickets fall Thursday.

“At the moment it’s hard to score when the ball gets older. There’s obviously a nice rough area out there for Lyon to bowl at and we saw that in the first innings; he was hitting it pretty much every delivery,” Warner said Friday.

Australia posted 290 for four from 69 overs after India were bowled out for 444, losing the last five wickets for just 75 runs from 19.4 overs. Lyon used the rough patch created by pacers’ footmarks to venomous effect and captured five wickets for 134.

The 27-year-old will once more target the footmarks outside the right-hander’s off stump, which were aggravated further Friday by a long spell from left-arm pacer Mitchell Johnson and around-the-wicket bowling from Indian quick Ishant Sharma.

“I think that’s going to be key for us tomorrow. We’ve got to try and take wickets with that new ball and once it gets older, use the conditions to get the ball going reverse,” he observed. Warner backed Lyon to spell trouble for Indian batsmen again, with six of them being right-handers.

“We’ve seen how much he’s evolved in the past 12-18 months. He’s worked hard at his game, he’s got a five-wicket haul in the first innings and there’s no reason why he can’t come out tomorrow with his tail up and help us take these 10 wickets.” 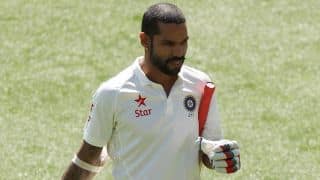