Fletcher has been on a short leave after completion of the ODI series against Sri Lanka.

Indian coach Duncan Fletcher, who was not present at the pre-departure press conference here today, is reported to join the Virat Kohli-led team in Australia from his native place South Africa.

Kohli and Team Director Ravi Shastri addressed the media on the eve of the departure for the four-match Test series starting December 4 in Sydney and Fletcher, who is now settled in South Africa, has been on a short leave after completion of the ODI series against Sri Lanka.

“Fletcher’s wife is unwell and he had informed the board that he will join the squad directly in Australia,” a BCCI official told PTI today.

The 18-member squad will leave for the tour Down Under post midnight today sans skipper Mahendra Singh Dhoni, recovering from a thumb injury, who is expected to join the team before the second Test in Adelaide starting December 12. 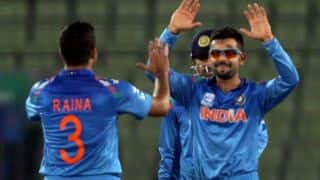