India collapsed from 71 for one to 224 all out in the first session.

Six Indian wickets in the morning session on the fourth day caused the India‘s downfall in the second Test, captain Mahendra Singh Dhoni said here Saturday. India collapsed from 71 for one to 224 all out in the first session. That set the tone for an Australian win and their 2-0 lead in the series.

Dhoni had no qualms in admitting that his batsmen messed up another chance of taking India to an overseas Test win. “It is disappointing and the most important thing is to reason out why it happened. Once you find that out, you can rectify the mistakes in the coming game,” Dhoni said.

“Today the first session was very crucial and I don’t think we handled it very well. Had we got a decent partnership going and taken the game on the fifth day, we could have exploited the conditions better. The morning session had a big impact on the game.”

The mayhem for India began even before they took the field in the morning. The batsmen were having a hit at the nets on wickets that had uneven bounce.

Despite the team’s repeated requests for fresh practice pitches, the Indian batsmen had to hone their skills on the dangerous worn-out pitches.

While batting on one of them, Shikhar Dhawan – one of India’s overnight batsmen – got hit on his hand and injured his right wrist. It meant the Indian opener couldn’t continue his innings and Virat Kohli had to walk out to the middle instead. Dhoni said that disrupted the serenity of the dressing room as the severity of Dhawan’s injury was known just minutes before the start of play.

“We went for the morning practice and the wickets were not very good. Shikhar was batting, got hit and left. I had a hit as well and left early because we found the wicket to be uneven,” Dhoni said.

“By the time we came back to the dressing room, it was really close to the start of play. It’s then that we saw that Shikhar was not 100 percent fit to bat. We could only give five-ten minutes to Virat to prepare.

While the catastrophic batting collapse proved to be the final nail in India’s coffin, the problems began on the third day itself when they couldn’t get the Australian tailenders out.

Mitchell Johnson led the way with a fiery 88 and the rest followed, allowing Australia to add 258 runs for the last four wickets. About India’s persistent short ball attack to the Australian tail, Dhoni said it would have proved to be successful with a slice of luck.

“We knew Mitchell can bat. So, it was important to bowl a few bouncers because we have got wickets with the short ball,” the Indian captain said. “Also, now we have bowlers who can bowl bouncers at good pace. Mitchell went for his shots and there were a few balls that didn’t quite go to the fielders. We kept changing our plans. It wasn’t that we went in only with one plan. In the end the only plan worked was taking the new ball. But we couldn’t do it after 60 overs.”

While accepting the flaws in his young team, Dhoni also urged people to be patient with them. He said he was confident that with a little more experience, this team will do well overseas. 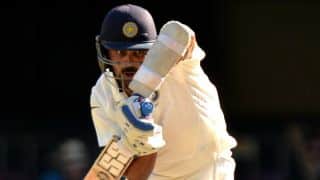 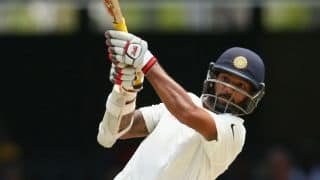