Having Ravi Shastri accompany the team on such a tough tour is a blessing. Twenty-three years ago, he was in a similar situation as a player. Back then, Team India were faced with an uphill task of playing a Test series and a tri-series before the ICC World Cup 2015.

Shastri, now Team India’s director of cricket, had scored a magnificent double hundred (206) in the drawn third Test in Sydney. He was also a key member of the World Cup squad. His presence, and the respect he derives from the current team, will only benefit the current side.

“I think it’s very important that when you have a long tour, you have the ability to switch off,” Shastri said on Friday. “You don’t have to be thinking overtime. You need to focus on what you have to do but when you are not playing, you switch off. You have got to have a way of relaxing, you have got to have hobbies. Australia is a great county, there are enough places to go to, get your mind off cricket,” said the 52-year-old Shastri said shortly before the team’s departure.

“It is important when you tour Australia that you enjoy the trip, and not be intimidated by Australia’s record in Australia. It demands tremendous self-belief and I believe this team has it. They have got an exciting bunch of young players but does not that mean they should be intimidated by the opposition. If you are prepared to guts it out, then there is no reason why you can’t perform. They are good competitors but we can show them that even we are good competitors. This bunch has it.”

Shastri’s no-nonsense approach will easily rub off on the boys. He did not give any importance to Australian legend Glenn McGrath’s ‘whitewash’ prediction. Nor did he entertain any questions on things that did not concern cricket. His answers — “Glenn McGrath is entitled to his opinion” and “that (wives and girlfriends on tour) is going to be handled by the BCCI. It is an administrative job, you want to ask me about cricket, I can answer” showed that Shastri meant business.

Regular skipper MS Dhoni will join the team after the first Test and coach Duncan Fletcher will travel straight to Australia as he is attending to his ill wife. “We have no choice. MS has hardly missed a match in the last so many years. He has played every format, so it’s only fair that he gives himself time to be fully fit and come back. Meanwhile, you have to go with what you have. Virat’s leading the side and it might be his first Test match as captain but I can assure you, you will see a guy who you feel has led in 20 to 25 Test matches. We will be out there putting our best foot forward. It’s a great opportunity for youngsters where if you have self-belief and back yourself that you will do well, you come out as a different cricket altogether,” the former all-rounder said.

Shastri gave his approving nod to captain Virat Kohli, who answered questions with aplomb. Kohli, on his part, acknowledged Shastri’s contribution since the time he joined the team as director of cricket in the one-day leg of England tour not long ago. “Ravi bhai enjoys a different respect in the team. When youngsters talk to him, see him around, it leaves them with a positive impact. He himself is a very positive person. And when he talks, he is always correct and very logical. His reading of the game is excellent. He has commentated in so many games that he has a lot of ideas of how the situation is and how to tackle it. These inputs are very helpful to youngsters.” 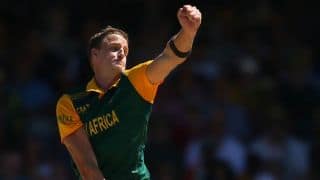 South Africa may lose momentum ahead of ICC World Cup 2015 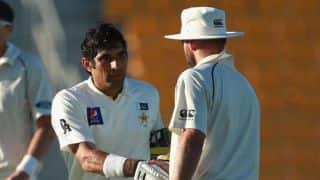