Fast bowler Mitchell Johnson says, that he will bowl short balls like he always has.

Australia strike bowler Mitchell Johnson that he will have no reservations about bowling short-pitched balls at India’s batsmen despite the Phillip Hughes‘ tragedy. Australia have signaled no let-up in their aggressive approach during the first Test starting on December 9, which has them challenging for the top of the Test rankings under coach Darren Lehmann.

Bowling bouncers has become a sensitive issue following the death of team-mate Hughes, after he was fatally struck in the head by a short-pitched delivery in a domestic game late last month.

Asked if he would shy away from bowling bouncers in the first Test, Johnson said, “We’ve got to play the way that we’ve been playing and that’s been aggressive”. “That’s the way I’ve always played the game and if that’s bowling the short ball like we have been, then that’s how we’ll do it. We’ll assess the conditions obviously, but we’re not going to change a thing.”

The cricket world was plunged into mourning over the Hughes tragedy, forcing a re-scheduling of the four-match series against India with the first Test switched from Brisbane to Adelaide. Johnson’s mindset has been a hot topic in the lead-up, with the left-arm speedster critical to the team with 68 wickets in the last two years.

The current international cricketer of the year decimated England with 37 wickets in Australia’s 5-0 series whitewash at home last season and stands as the biggest threat to India’s batsmen. Along with fellow fast bowlers Ryan Harris and Peter Siddle, he has been largely responsible for Australia’s recent success.

“I’ve been bowling very aggressive for the last 18 months and I’m not going to change that,” Johnson said, adding that he was uncertain how he would feel if one of his short-pitched deliveries hit an Indian batsmen in the head. “I’m not sure. It might be different [reaction] this time,” he said.

“Everyone is different and for me for my first session it was a case of just getting back into it”.  “I didn’t bowl a bouncer until late in the first session, the more I’ve bowled the better I’ve felt”, he added.

“It’s going to be an emotional morning and for me going out there and bowling the first spell might be the most difficult. Then we might just get into the game a bit more but I think mentally, we’ve had a few training sessions, the vibe’s good.”

The Australian players will wear Hughes’ Test cap number 408 on their playing shirts for the match, and black armbands in his honour. 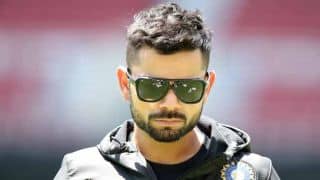