David Warner is expected to return for the final two ODIs.

David Warner, Australia’s opening batsman has left India vs Australia 2015-16 series mid way owing to family responsibilities. Usman Khawaja will replace Warner for the second and third ODI. Warner is expected to come back for the final two one-day games. Warner and his wife Candice are expecting their second child. Hence, it was imperative for him to be with his wife. Khawaja will now in high probability play the second one-dayer scheduled for Friday at Brisbane. In a conversation with Cricket Australia’s official website Rod Marsh, country’s national selector said, “Usman [Khawaja] has been in fantastic form this season and was unlucky to miss out on a place in our squad for the Victoria Bitter ODI Series in the first place. This call-up is a reward for that form and it is great to have someone of his quality to step into the squad in David’s absence. We wish both David and Candice well and look forward to welcoming David back into the squad when circumstances allow.” FULL CRICKET SCORECARD: India vs Australia 2015-16, 1st ODI at Perth

Earlier, John Hastings too had joined Australia’s squad replacing Mitchell Marsh to give the latter some rest. Hastings is excited to join Australia’s team for the second ODI, “It’s been a tough couple of weeks actually. I’ve had a bad run with having a few accidents in the nets .. But I’m feeling really good at the moment, the body is pretty good. If I do get an opportunity hopefully I can take it with both hand and contribute to wins. That’s all I want to do is try and get in there and contribute to a team win.”  READ: David Warner expecting Candice Warner’s call for birth of 2nd child during India series 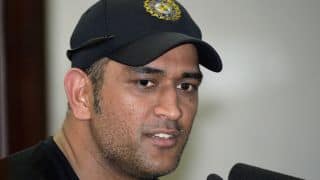