Catch the live streaming of the fifth ODI of the tri-series between India and Australia here.

India and Australia face off in the fifth game of the ongoing triangular One-Day International (ODI) series at the Sydney Cricket Ground (SCG) on Monday. It is a do-or-die game for India, who face the exit from the tournament before the final.

Australia head to the SCG in a relatively relaxed state of mind, having already qualified for the final courtesy a three-wicket victory against England in the fourth game to remain unbeaten in the series so far. They missed the services of David Warner and Shane Watson in the previous game, due to their troublesome hamstrings. Despite the absence of the two key members of the Australian side, the hosts managed to pull off a three-wicket win, courtesy Steven Smith’s fighting century.

India, on the other hand, are yet to win a game in their disastrous tour so far. They have lost both their games in the tournament so far, by four and nine wickets to Australia and England respectively. A defeat in this encounter would ensure an Australia vs England final at Perth on February 1. While the bowling has been an area of considerable concern for India, it is their batting that has disappointed, especially in the match against England in which the Indians were shot out for a mere 153, before collapsing to a nine-wicket defeat. 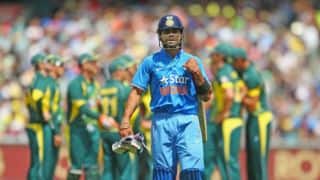