The ODI series was a one-sided affair as India comfortably drubbed the Australians 4-1. However, the ongoing T20I series has not been the same.

The ODI series was a one-sided affair as India comfortably drubbed the Australians 4-1. However, the ongoing T20I series has not been the same. Australia have put up strong a strong fight after losing the first match. With the series now locked at 1-1, the stage is set for the decider, as both the teams would lock horns for one last time in the third and final T20I at the Rajiv Gandhi International Stadium, Uppal, Hyderabad on Friday. Judging by the intensity shown from both sides, this is going to be a tough contest. Expect some good and competitive cricket from both sides. Meanwhile, let us have a look at the key battles the match could produce. FULL CRICKET SCORECARD: India vs Australia 2017, 3rd T20I at Hyderabad

Virat Kohli vs Jason Behrendorff: The list has to start with Kohli. He had fallen for a duck for the first time in his T20I career. He lasted two balls from Behrendorff before edging one on to his pad and getting out caught and bowled. Once again he is expected to face stern competition from Behrendorff, Australia s star bowler in the previous tie. He had bowled beautifully, with 4 for 21. Will be finish on top again?

MS Dhoni vs Adam Zampa: Dhoni was outfoxed by Zampa in the last match. While that is true, it is also a fact that he is one of the more skilled batsmen against spin in the current Indian side. On the other hand, Zampa never shies from a challenge, and is always willing to trade runs for wickets. India vs Australia, 3rd T20I, preview: Should Kohli play Nehra in place of either spinner?

Travis Head vs Indian spinners: Moises Henriques got more runs at Guwahati, but Head definitely looked more in control towards the start. However, if the pitch offers turn, Yuzvendra Chahal and Kuldeep Yadav may replicate their ODI success story. India may also play Akshar Patel to add some variety. Things may not be as easy this time.

Bhuvneshwar Kumar vs Aaron Finch: Bhuvneshwar had dismissed Finch cheaply at Guwahati. Make no mistake: Finch will be waiting to give it back to him. One of the most-feared batsmen in the format, Finch can take the attack to the fast bowlers, swinging his bat mercilessly and hitting them out of the attack. India vs Australia, 3rd T20I: Rain threat looms over decider at Hyderabad

Aashish Nehra vs Indian think-tank: Nehra has a maximum of 2 matches left in an international career that has spanned almost two decades. Will India s cult hero get to play at Hyderabad? The possibility cannot be ruled out after the lacklustre show by the Indian spinners at Guwahati. 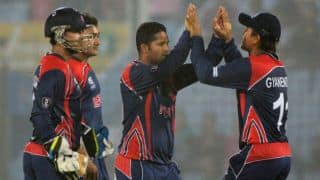