TNCA has demanded Rs 1.5 crore from the BCCI for security cover and other expenses, including the conduct of a warm-up game for the Australia team.

New Delhi: Tamil Nadu Cricket Association (TNCA) has demanded Rs 1.5 crore from the BCCI for security cover and other expenses, including the conduct of a warm-up game for the Australia team, scheduled to play the first ODI in Chennai on September 17. The TNCA top boss RI Palani has written to the BCCI, explaining the huge costs that the association has to incur in the lead-up to the first ODI. The Australian team is scheduled to arrive on September 8 after completing a two-Test engagement in Bangladesh. They are slated to play five ODIs and three T20 Internationals. PTI is in possession of the letter that Palani wrote to BCCI, where he explains why Rs 1.5 crore is required. FULL CRICKET SCORECARD: India vs Australia 2017, 1st ODI at Chennai

Palani wrote: “The normal practice is that the host association takes care of the visiting team for three days only namely — the day prior to the match, the day of the match and the next day when the team departs. Obviously, being the first game, the visiting team is arriving in advance to acclimatise.” The TNCA boss then wrote that estimated cost per day will be Rs 20 lakh. “While the hotel cost is being borne by them, we did a rough calculation based on our estimation of the cost and we found that it will cost around Rs 1.5 crore for us at an average of Rs 20 lakh per day approximately,” he wrote.

The costs that TNCA expects to incur are primarily security related. “We have to have a camp commandant in the hotel with 25 to 30 police personnel on duty with the team. Tamil Nadu Police will be charging us for the same. In addition, transport, ambulance, medical team as well as practice facilities will add up another sizeable amount,” Palani further wrote. Josh Hazlewood ruled out of Bangladesh series, India ODIs

With GST being levied on tickets along with Local Entertainment Tax, the TNCA also needed to keep the ticket prices affordable for general public. Palani informed the BCCI that “TNCA will not be in a position to meet cost of the pre-match stay” as net retention (profit from ticket sales) is rather minimal after incurring the cost of staging the game.

The TNCA also made it clear to the BCCI that the Rs 1 lakh, which the board has offered for conducting the warm-up game, was not enough. “The cost of organising that [warm-up] match will be several times more and we will be able to absorb the cost within the Rs 1.5 crore referred above,” Palani added.

Palani also expressed his surprise at BCCI’s suggestion that the warm-up match be played at a private venue which is not in TNCA’s control. The letter, however, does not mention which private ground in Chennai did the BCCI refer to. “We were rather surprised at this suggestion, more particularly since that ground is not currently not usable at all as it is under some repair work and is not even available for our league games. We were intrigued as to how this suggestion came about.” 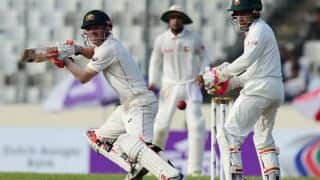