Australia took on a second-string Board President s XI in Chennai in hopes of getting serious match practice ahead of the 5-ODI series against India. Winning the toss, Steven Smith asked his men to make good use of a flat deck at MA Chidambaram Stadium. Apart from a couple of blips, most of the top-order batsmen made their outing count. David Warner, Travis Head, Marcus Stoinis and Smith himself stuck fifties to gain much-needed practice. Despite Washington Sundar’s economical spell (8-1-23-2), Australia ended up making 347 for 7 runs in 50 overs.

Australia lost opener Hilton Cartwright in only the second over before a run was scored. Avesh Khan had him caught by Gurkeerat Singh Mann off a drive. Then Smith joined Warner, and the pair added 106 in 86 balls. Smith took charge in particular and went after Sandeep Sharma. Warner exploded as well once he got his eye in, being particularly harsh on the likes of Kulwant Khejroliya and Kushang Patel. He reached his half-century in 42 balls. However, Kushang had last laugh, having Warner caught-behind for a 48-ball 64.

With Warner gone, Washington Sundar and Rahil Shah were brought into the attack. Smith raced to his half-century in 63 balls with a six off Shah. Sundar snatched Smith, his Rising Pune Supergiant skipper, for 55, once again caught by Gurkeerat.

Travis Head was soon joined by Glenn Maxwell. The pair took Australia past the 150 as runs kept flowing despite the fall of wickets. Sundar snapped up Maxwell for 14 just as he was getting settled.

Head turned up the heat and went for the kill, reaching his fifty in 54 balls. He added 98 with Marcus Stoinis before Akshay Karnewar snared him for a 63-ball 65. Stoinis, making a return after a long layoff, played an explosive innings, reached his fifty in 42 balls. He eventually fell for a 60-ball 76, an innings that included 5 sixes. Matthew Wade joined in the fun as well, thrashing the attack for a 24-ball 45 before falling to Kushang.

Barring Sundar, only Rahil Shah (7-0-32-0) had impact of any sort. It will be interesting to see how the local batsmen stand up against Josh Hazlewood, Pat Cummins, Nathan Coulter-Nile, James Faulkner, Adam Zampa and Ashton Agar. 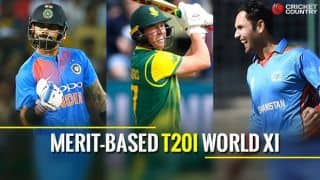