During the opening one-dayer against India, Maxwell entered in the 48th over and scored 11 runs in the five deliveries he faced.

Australia legend Allan Border is not in favour of a batsman like Glenn Maxwell batting at the No. 7 position. Maxwell, who is known to go berserk at the business end of the innings, came into the middle in the opening one-dayer against India at the Sydney Cricket Ground (SCG) at No. 7 in the 48th over. He could play only five deliveries and scored 11 runs.

It feels to me that he s slightly wasted in that position. Hopefully, going forward he can be used as not a pinch-hitter but, depending on the circumstances of the game, you could throw him in at No.3 if you had a good start for example, Border, while criticising the Aaron Finch-led brigade, told Fox Sports. (ALSO READ: Not pleased with the way we played: Virat Kohli)

The 1987 World Cup-winning captain feels that Maxwell should be pushed up the order a move which will allow him freedom to play his brand of cricket. That would let him play with a bit of freedom, he said.

Meanwhile, Border threw his weight behind the ignored Maxwell in the Test arena. I think he s a good enough player to be playing Test cricket, but I think the ball is in his court as far as putting numbers on the board to make him irresistible, Border said. (ALSO READ: I will remember Virat Kohli’s wicket for a very long time: Jhye Richardson)

So [he should] go away, dominate Shield level and the selectors will look at him for sure.

Former Australia cricketers Shane Warne and Mark Waugh also endorsed Border s view and said that the dangerous Maxwell should be allowed to face more deliveries. I don t know about this batting order. I d really like to see Glenn Maxwell in. He s still sitting in the shed, Waugh said.

The second ODI will be held on Tuesday at the Adelaide Oval. 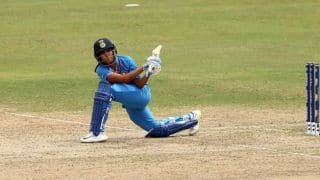