Shami expressed that he was in a state of shock after news of the ghastly attack trickled.

India pacer Mohammed Shami wants to win the upcoming series against Australia for the soldiers killed in the Pulwama terror attack. Australia will play two Twenty20 Internationals which begins with the first match on February 24 at Vizag. The five-match ODI series gets underway on March 2 with the series opener at the Rajiv Gandhi International Stadium in Hyderabad.

“I am of the opinion though that if we win the forthcoming series against Australia at home, it should be dedicated to these martyrs. I personally want to win this for them,” Shami, who will feature in the ODIs, told India Today on Tuesday. (ALSO READ: It is high time we need to take strong action against the perpetrators of terrorism: Yuzvendra Chahal)

The 28-year-old Bengal fast bowler, who has pocketed 108 wickets in 59 ODIs, expressed that he was in a state of shock after news about the ghastly attack trickled.

“I am indebted to make a contribution for families of our martyrs. In my view, every Indian should come forward in support of our forces right now. They sacrifice their life for us and we should not even think twice to help them,” he said. (ALSO READ: HPCA stadium in Dharamsala removes 13 pictures of Pakistan cricketers)

He said that he s ready to fight for the country. “I am filled with anger and these attacks have shaken my heart. I don’t think there will be anyone in our country who isn’t feeling the same. My thoughts are with the families of our soldiers. I am ready to fight for my country, for our family. No Indian can dare to say no. I am ready to face any eventuality.” (ALSO READ: ICC clarifies India-Pakistan match at ICC World Cup 2019 will go ahead as planned)

The Pulwama attack has left doubt if India will face Pakistan in the ICC World Cup 2019 on June 16 in Manchester. “I believe that the government should take this decision. I am sure whatever they will decide, we will abide by it, Shami said. 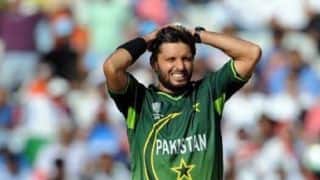