Virat Kohli-led team became the first Indian and Asian side to win a Test series in Australia after they beat Tim Paine's Australia 2-1 in the 4-match series.

Melbourne: While the Tim Paine-led Australian side put in the hard yards, it failed to stop Virat Kohli and co. as India sealed their maiden Test series win Down Under by winning the Border-Gavaskar Trophy 2018-19. (ALSO READ: Justin Langer calls on batsmen to step up against Sri Lanka)

Although Australia won the Perth Test and levelled the series 1-1 after India had won the opening Test in Adelaide, India took an unassailable 2-1 lead, winning the third Test in Melbourne before the fourth and final Test in Sydney ended in a draw following the washout on the final day.

Justin Langer, the Australian coach, revealed that the media queries and criticism following the series loss was one of the toughest times he has had professionally . (ALSO READ: Australia call up in-form Patterson for Sri Lanka Tests)

I look back now at Sydney and Melbourne (and) without sounding like a sook, we felt like punching bags through a lot of criticism in the media, Langer told the Melbourne radio station SEN on Tuesday.

We got beaten in Melbourne on Boxing Day, we drew the last Test in Sydney and India were a really tough opponent, but I m sure in 10 years I m going to look back and say, geez that was a tough time but I m better for it, added Langer.

While Jasprit Bumrah and Cheteshwar Pujara were the star performers for the visitors, Kohli s timely contributions with the bat and the pace bowlers impressive show were pivotal to India s unprecedented success. Australian batsmen, on the other hand, struggled and their bowling attack, barring the exception of Pat Cummins, failed to show consistency as India won the four-match series 2-1 to become the first Asian team to win a Test series on the Australian soil.

While the team is going through some tough times, Langer made it clear that Australia are ready for the challenges that await them.

I m stronger and wiser by the day. We keep rolling our sleeves up and it s a tough gig, but we re up for the challenge, that s for sure, concluded Langer. 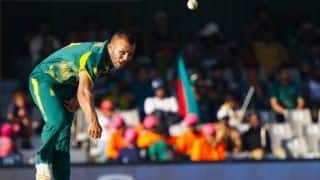 2nd ODI: Paterson, Shamsi in as South Africa opt to bowl against Pakistan in Durban