If Australia do manage to chase the target, they will create history with the only successful fourth innings Test run chase of more than 300 at Adelaide coming in 1902

India have set a 323-run target for Australia to bat on a deteriorating Day 4 pitch after Cheteshwar Pujara and Ajinkya Rahane s 87-run partnership provided the tourists with a good start to the day of the first Test at Adelaide on Sunday. India were folded for 307 in their second dig with Nathan Lyon emerging as the pick of the bowlers with six wickets.

If Australia do manage to chase the target, they will create history with the only successful fourth innings Test run chase of more than 300 at Adelaide coming in 1902, when the hosts made 315 to beat England. The biggest on the ground in modern times was 239 in 1982, when the West Indies managed the feat.

Resuming their innings at 151/3, India added 109 runs to the first session. The impending partnership was broken by some exceptional bowling from Nathan Lyon, who picked the big wicket of India s first innings centurion Pujara, departing to a standing ovation from the Adelaide crowd for his 71. Rohit Sharma added just 1 to depart to Lyon, who was the pick of the bowlers with six wickets.

Rahane, who brought up a fine half-century off 111 balls, his 16th in Tests, was joined by Rishabh Pant, who smashed three consecutive fours and a six off Lyon in one over. However, Australia s strike bowler had his man in his next over after Pant tried to heave this one, but ended up getting caught by Aaron Finch at deep cover point. Pant departed after a nice little cameo scoring a 16-ball 28.

India s batting post-lunch session was questionable coming out with an aggressive intent right at the start, the lead just kissing the 300-run mark. Their intent seemed to have backfired as Australia snapped three wickets in the space of seven balls to clip the Indian innings, looking to extend their lead to around 350.

Lyon got Rahane, who tried to reverse sweep it, only to find Starc at backward point. He then had Mohammed Shami for a duck, but Jasprit Bumrah defended it well to deny Lyon his hat-trick.

Starc got the final wicket of Ishant Sharma, who tried to defend a short one, but ended up giving Finch an easy catch at short-leg.

For Australia, Lyon ended with exceptional figures of 6 for 122, while Starc, who was off colour, picked three wickets going for 40 runs. 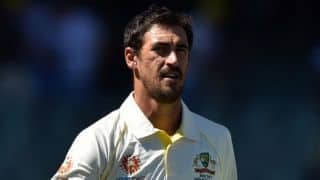