The last time Cummins bowled to Kohli was in early 2017 when he got his number in the Ranchi Test.

Wining the toss and getting to bat on a hardy Adelaide Oval surface did not go the way India would have planned, as another overseas top-order wobble left them at 56/4 by lunch on day one of the first Test versus Australia.

India lost two wickets in seven overs, their openers departing to nagging and accurate pace bowling, but it was the massive wicket of Virat Kohli for three that really gave Australia a lift on Thursday morning.

The successful bowler was the fast bowler  Pat Cummins, who has now dismissed Kohli twice in four balls in Test cricket. The last time Cummins bowled to Kohli was in early 2017 when he got his number in the Ranchi Test match for six.

On that occasion, Cummins had Kohli edging to second slip.

Today, Cummins came on as first change and struck in his opening over, getting the Indian captain courtesy a spectacular one-handed catch by Usman Khawaja at gully. Kohli saw width from Cummins, chased it it and edged in the air for Khawaja to leap to his left and pluck a stunner. India were 19/3 in 10.3 overs, their talismanic captain gone for three.

The Australian bowler to dismiss Kohli the most in Test cricket is Nathan Lyon, who has got him five times. Then comes Peter Siddle (four), followed by Ben Hilfenhaus and Mitchell Johnson (three) and Mitchell Starc, Josh Hazlewood, Ryan Harris and Cummings (twice). 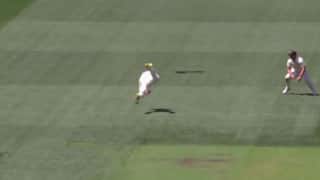