Perhaps, not the best way to end a series but Indian camp isn’t complaining. They are celebrating, dancing, taking a lap of ground, soaking in the drizzle and adulation. India , with victories in Adelaide and Melbourne, have won the Test series 2-1 under Virat Kohli.

9:01 am: HISTORY MADE! The play has been called off on Day 5 due to inclement weather which means India claim the four-Test series 2-1 – their first such win on Australian shores.

07:40 am: Looks like the play won’t restart anytime soon as it’s drizzling.

06:58 am: The first session has been washed out due to persistent rain.

Annoying…rain is neither getting intense nor going away. English weather in Australia. #AusvInd #7cricket

04:00 am: Guys, it’s drizzling at SCG. The pitch has been placed under covers. Not a good start to the final day’s play. Inclement weather notwithstanding, India are all set for their maiden Test series victory on Australian soil.

Hello and welcome to LIVE coverage from the fifth and final day of the fourth Test from the Sydney Cricket Ground (SCG) between India and Australia. The stage is set as India are on the cusp of their maiden series win in Australia since the bilateral contest began in 1948 when Lala Amarnath‘s team clashed with Don Bradman‘s side. It does have a nice ring to it!

India, leading the series 2-1, will want to finish it off on a high they need to take 10 wickets today, while, Australia will have to fight really hard to salvage a draw. That and more as we await history to be unfolded in a few moments from now. Stay tuned!

DAY FOUR, AS IT HAPPENED

Kaushik: Kuldeep Yadav has shown that he is no flash-in-the-pan, no one-trick pony

Quotes: After Lord s, this performance will give him lot of confidence: Bharat Arun on Kuldeep Yadav

Quotes: Australia will fight to save the Test: Peter Handscomb 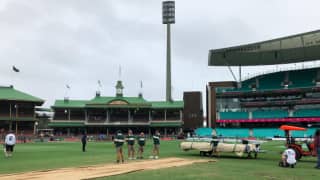