Rishabh Pant scored his first fifty of the series to add to Australia's frustration at the SCG.

Cheteshwar Pujara fell seven runs short of a fourth Test double-century – a surprise, given his record of converting scores of 160 into 200 – as India marched to 491/6 by tea on day two at the Sydney Cricket Ground. This is India’s highest total in a Test outside of Asia since the West Indies series of 2016.

An excellent 193 from 373 deliveries marked a personal best overseas for India’s marathon man, who put on 89 for the sixth wicket with Rishabh Pant who raised his first fifty of the series to reach 88, accompanied into the tea break by a firm Ravindra Jadeja.

It has been a record-setting tour of Australia for Pujara, one that has seen him bat for over 30 hours while setting a new benchmark for visiting batsmen in a series of four Tests or under in Australia and highlight the intense nature of his character. In South Africa a year ago he struggled against high-quality fast bowling but showed the appetite for a fight; in England last summer he got good scores but just one quality hundred. In Australia, he has so far stacked up 521 runs with three exceptionally centuries. (LIVE UPDATES: INDIA vs AUSTRALIA, 4th TEST)

It was a slow first hour of the day as Pujara and Hanuma Vihari got used to facing Australia’s quicks on a fresh day and refused to chase outside off stump. There were occasional cover-drives, but overall Pujara was content to nudge into the gaps and deflect off his pads to keep the fielders chasing.

A drive into the covers for four off Nathan Lyon took Pujara to 150 for the seventh time in Tests, and raised the 100 stand with Vihari. In the same over, however, Lyon claimed Vihari when a mistimed sweep took the glove and settled in short leg’s palms for the simplest of chances. The batsman reviewed, but Snicko showed a faint spike. Vihari made 42, adding just three runs to his overnight score in an hour. (LIVE SCORECARD: INDIA vs AUSTRALIA, 4th TEST)

When he twirled Starc to fine leg for two, Pujara went past his previous highest score outside of India, the 153 he made in Johannesburg in 2013 and in Galle in 2017. Of the six times he had previously reached 150, thrice Pujara was dismissed before 159 and each time he had crossed that score, a double-century was achieved.

Dropped on 192 by Usman Khawaja at slip when he top-edged a cut off Lyon, Pujara added one run before the same bowler lured him out of his crease and beat him in the flight. Lyon held a low return catch to cut off Pujara, ending an innings that spanned 373 balls to set a new benchmark for visiting batsmen in a series of four Tests or under in Australia.

Pant, who collected his first four before lunch when he pushed a 150.6kph yorker from Starc, tailing into leg stump, past the stumps, was restrained until he collected his half-century from 85 balls. Then he started charging out to Lyon, misting a few shots but still getting a four over mid-off. Marnus Labuschagne was reverse-swept for four with power, Starc punched on the rise into the covers and a couple of attempted heaves connected with air. A second Test hundred is within Pant’s grasp after tea.

Jadeja is batting on 25 having swung one stunning six off Pat Cummins. The stand with Pant is worth 73. 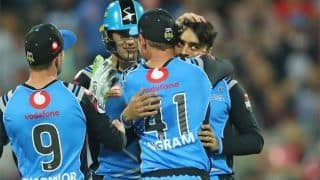