The opener Aaron Finch and allrounder Mitchell Marsh are on course to be omitted from Australia’s XI for the fourth Test against India in Sydney tomorrow, according to reports in the Australian media.

News Limited reported that Finch had lost his place to Marnus Labuschange and that Peter Handscomb had taken Marsh’s place, though Tim Paine earlier on Wednesday said that Australia had delayed naming their team to have another look at the SCG pitch.

Finch, who made his Test debut in October as opener in the UAE, has this series made 97 runs in six innings for an average of 16.16. Marsh lost his place in Australia s XI for the first two Tests against India on account of his inconsistency, but returned for the Boxing Day Test in which he scored 19 and 10 and went wicketless in 26 overs.

“There’s ongoing discussion the last day or two but we’ll have a final look at the wicket and we’ll have our last chat then,” Paine told reporters. “We’re not too far away. As I said all along, we’ll be looking to pick the best XI that we think is the best combination to win this Test and the wicket will play a part in that.”

Handscomb, who played in Adelaide and Perth before he was dropped for the MCG Test after scores of 34, 14, 7 and 13 in the series. was singled out by Paine.

“If we think India were to play two spinners Pete could be a really important player for us, said the Test skipper. We know how good a player of spin he is. That s one of the discussions we ll be having today, if we think India will go that way and if they are, are we prepared to bring him back in.”

Australia need to beat India at the SCG to level the four-match series 2-2. 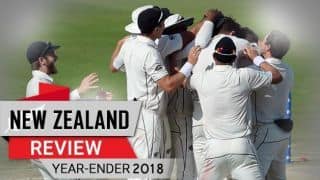