Australian batsmen should be switched on from ball one in Perth: Marcus Harris

Australian batsmen should be switched on from ball one in Perth: Marcus Harris

Harris, who faced Mitchell Starc in the nets, backed the under-firing pacer to bounce back in Perth.

Promising Australia opener Marcus Harris is relishing at the opportunity of playing his second Test at home when the hosts look to level the four-Test series at the new Optus Stadium in Perth on Friday.

The 26-year-old Harris who registered a pair of 26 in the opening Test at Adelaide which India sealed to create history, said the Aussie batsmen have to be switched on from ball one against India s bowlers.

I didn t feel out of my depth at all. But I realised pretty quickly they don t bowl any crap and they don t miss any chances that you give them, so you ve got to be switched on from ball one, Harris told reporters at the sidelines of the team s opening training session at the WACA in Perth.

The Aussies are back at the WACA Ground and start with a very competitive game of Tedball #AUSvIND pic.twitter.com/MWcFhZQINh

Harris is still livid with himself for throwing his wicket in the second innings at Adelaide after settling in. He was dismissed by Mohammed Shami after he flashed outside off but ended up in giving Rishabh Pant an easy catch behind.

You could probably tell by my reaction that teams have tended to do that to me a little bit in Shield cricket… I felt like I got sucked in a little bit, he said.

Harris, who faced Mitchell Starc in the nets, backed the under-firing pacer to bounce back in Perth. He bowled pretty well. There was obviously a bit of talk about him after the game (at Adelaide), but I thought he bowled pretty well during the game, he said.

“He felt like he was in good rhythm out there before so I’m sure he’s ready and raring to go before Friday.”

ALSO READ: ‘Australia should contemplate dropping Mitchell Starc if he s not up to scratch in Perth’

The Western Australia, Harris mentioned that although he would have loved to have played at the WACA, he is looking ahead to playing at the Optus Stadium.

It would have been great to have played at the WACA, where it has always been, but to get the opportunity to play at the new stadium will be pretty special, he said.

I know most of my family were in Adelaide but I think all of them will be here. To play in front of a home crowd will be pretty special.

I remember coming to Test matches here all the time… they re great memories. Hopefully I can create some memories for young kids coming to games at the new stadium. 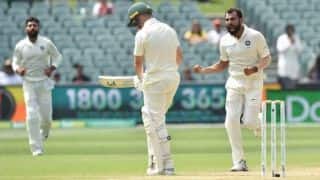 Indian bowlers don't miss any chances that you give them: Marcus Harris