Australia skipper Tim Paine believes that his inexperienced side have the potential to get ahead of India but are still a work in progress.

Buoyed by team’s comprehensive victory in the second Test, a cautious Australia skipper Tim Paine believes that his inexperienced side have the potential to get ahead of India but are still a work in progress.

The third Test begins in Melbourne on Wednesday with the four-match series levelled at 1-1. “I don’t feel like we are on top of them. We feel like we are getting better with every Test,” Paine said on the eve of the Boxing Day Test.

“We are improving with every game but we need to keep stacking up good days and play good Test cricket. If we can do that for the next 4-5 days I think we will be in the thick of it again,” Paine said.

“Certainly when you have an inexperienced team and you get a big win like in Perth against the number one team in the world, guys are going to grow in confidence a little bit and come to Melbourne feeling better than when we did to Perth,” the skipper said.

India have made three changes for the Boxing Day Test with Mayank Agarwal, Rohit Sharma and Ravindra Jadeja replacing openers Murali Vijay, KL Rahul and pacer Umesh Yadav but Paine is not bothered about changes in opposition rank.

“India’s changes don’t really bother us because we have done our homework on all of their players for a number of weeks now. We have been prepared for all of them to play. What they do is their business, and we will keep focussing on what we are doing,” Paine said.

The skipper added that the journey since leading the side has been a learning curve for him, even as Australian cricket is just starting to come out of a period of strife.

“I haven’t changed a lot. I came into the team and into the job at a time when I have already been through so much as a cricketer and a person. I am bit older than most guys to come back into the scene so I have had a bit more life experience and happy being myself. That’s how I have kept it and so far it is working out okay. No need to change,” he said.

As is the norm, Australia named their playing eleven with Mitchell Marsh coming in the side replacing Peter Handscomb.

Paine said that the change is to do with bowling and it would help out their four-bowler attack, before adding that Handscomb could be back for the Sydney Test.

“We did it last year during the Ashes as well and majority of this decision is based on the fact that it will be hot and the bowlers have had a big role play. We think Mitch can come in and do a good job with the bat and will be a great support for our bowlers as well.

“Peter knows that there are things we would like him to improve. Going into Sydney, where it normally spins, I think he will come back into it quickly because he is our best player of spin. He would like to get better because we all like to do that and he will be doing everything he can to come back into the side,” explained Paine.

The MCG pitch came under sharp scrutiny after being rated poor in the Australia-England Ashes Test last year. There is some grass on the pitch this time around, but again Paine echoed the thoughts of his coach Justin Langer who exercised caution against reading too much into it.

“I think the pitch will be really good. It will be really hot as well for most of the game. Most of the Shield games have been played here, but there has been only one result. So I don’t think it will play drastically different from how it has played all these years, although it does look a bit different. But we saw in Perth looks can be deceiving at times.

Considering the conditions at the MCG, Paine said he would opt to bat first if given the opportunity. “I am not sure to be honest (if it is a bowl-first pitch). The grass here can be deceiving, and I haven’t played here this year but I have a few Victorians in our camp. They said it has looked worse than it has played at times and again with the hot weather around, it would be a hard one to win the toss and bowl I would imagine,” said Paine.

Irrespective of the pitch though, Paine expected spinner Nathan Lyon to have a major impact on the game. “I said after Perth that we think Lyon is the best spinner in the world and we are really lucky to have him. Whether it spins here or not, at the moment, how Lyon has been bowling, it is irrelevant. He gets the job done in any conditions and we are lucky to have him in our side,” he signed off. 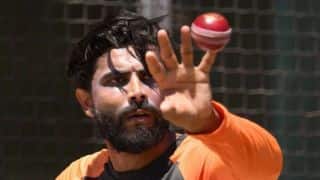 Virat Kohli hopeful of MCG track to be much more lively