Australia play five ODIs in India and five in the UAE before the World Cup.

Australia s limited-overs captain Aaron Finch has credited his team s batsmen for blunting India s spinners during the ongoing ODI series, which he hopes has set the template headed into the 2019 ICC Cricket World Cup.

With 11 ODIs left until they launch their World Cup defence on June 1, Finch is aware of the challenge ahead with five games in India and five in the UAE against Pakistan. Australia need to win the last ODI to claim their first bilateral ODI series win in two years, and how his team-mates have kept Kuldeep Yadav and Ravindra Jadeja to just four wickets between them is a positive Finch hoped was indicative of the way forward in a World Cup year. (ALSO READ: Australia missing Steve Smith and David Warner: Shikhar Dhawan)

“There’s been a lot of talk around our batting, particularly in one-day cricket through the middle overs,” Finch told reporters on Thursday at the MCG. “The way we’ve played their spin so far 3/115 from 22 overs in Sydney and then 1/115 in the last game I think is a really good indication that the improvement is there and the mindset shift in particular from the last couple of months has been really good. That’s been a real positive so far. We’ve adapted to our game plan and stuck to it really well.”

Kuldeep, the wrist-spinner, on Tuesday in Adelaide conceded 66 runs for his most expensive wicketless outing in 35 career games. Jadeja has a series economy rate of 4.85 but only has two wickets in 20 his overs.

The final ODI is at the MCG on Friday. 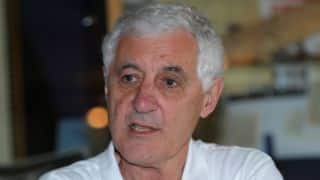 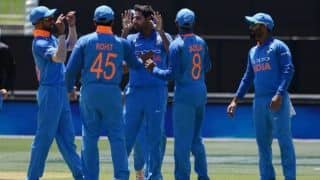