Maxwell scored a breezy 48 to help Australia to 298/9 in the second ODI.

Australia s coach Justin Langer has underlined the value of having Glenn Maxwell bat at No 7 in ODIs, stating that the Victorian allrounder is in a perfect batting spot despite calls for him to be pushed up.

During the opening ODI against India, Maxwell walked out to bat at No 7 in the 48th over and faced only five deliveries, from which he scored 11 runs. Over the past 12 months, Maxwell has batted at No 6 six times but in the last three ODIs has been pushed down a spot, with Marcus Stoinis and Alex Carey sent in at No 6.

The decision to hold back Maxwell did not sit well with Allan Border, who after the SCG game said that the allrounder was being wasted there.

On Tuesday, Maxwell scored a breezy 48 from 37 balls to help a sluggish Australian innings end on 298/9 in the second ODI against India, and Langer was hopeful that criticism of his position would dwindle.

“I remember the days when Michael Clarke used to bat seven and Michael Hussey used to bat seven,” he told reporters after Australia s six-wicket loss. “I used to muck around with Huss saying, ‘mate, you have got the best job in the world, you never bat, you get paid a fortune but you never bat because the team is going so well’. But when Maxi can come in an put the finishing touches on like he does, for me it’s the perfect position.”

Langer cited the various experiments the Australian team have made over the past two years, during which they have lost six consecutive ODI series.

“We haven’t had the success we’d like to and we’re trying different things,” he said. And for me, Maxi, he’s probably the best fielder in the world, we love it, it’s contagious his energy. He has been captain of the (Melbourne) Stars, he has got good leadership qualities as well.

“So if he can come in and put the finishing touches on like he does, it’s always a nervous time for an opposition (when) you still know you you have got a Glenn Maxwell or a Mike Hussey … coming in down at seven. Maxy will be a very important part of our team if we’re to win the World Cup. I honestly think, despite the debate, that is his best spot in our team for us at the moment and we’ll flick him in (earlier) every now and then when we need a little cameo.”

The third and final ODI between India and Australia is on Friday in Melbourne. 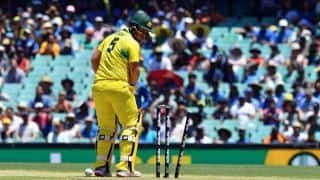