Head said that Marsh, who finished with 0/23 from 15 overs at the end of the opening day, shouldn’t have been subject to booing.

Travis Head has slammed the partisan crowd at the Melbourne Cricket Ground (MCG) for booing team-mate Mitchell Marsh, who was replaced by local boy Peter Handscomb for the crunch third Test against India on Wednesday.

The junior of the Marsh brothers was welcomed with a huge chorus of boos from the 70,000-odd MCG crowd when he was introduced into the bowling attack after Virat Kohli decided to bat.

Head said that Marsh, who finished with 0/23 from 15 overs at the end of the opening day, shouldn’t have been subject to booing.

“I don’t think it’s great,” Head was quoted as saying by the Sydney Morning Herald on Wednesday.

“Obviously, we see it a bit with [Indian captain Virat] Kohli as well. But for Mitch, who worked his bum off today, I thought he bowled exceptionally well, I thought he created great pressure, in tough conditions, fought really hard. So I don’t think any Australian cricketer in Australia deserves to be booed.”

ALSO READ: It wasn’t easy to get hold of my emotions: Mayank Agarwal

Head said that he understood that the fans wanted to see their local player in action but pointed out that no Australian player should be booed in his own country.

“I understand a Victorian crowd, and Petey obviously missing out, but I think it’s pretty poor,” Head said.

“[Marsh] showed today [that he is] a great team man, great fella, worked his backside off for the boys today, and I think he did a good job, so disappointing, so hopefully that won’t be the case for the next few days.”

Head said that Marsh, who was named vice-captain of a new-look Australia side, will not be perturbed by the reception.

“He got on with business, he did his work, he bowled exceptionally well, did the job that was needed for the team, and that’s what Mitch has always done,” Head said.

“He’s always been someone to get the energy around the group, lead from the front. I think he did that in tough conditions, to grab the ball and bowl the way he did, was really good. He created a couple of chances as well.” 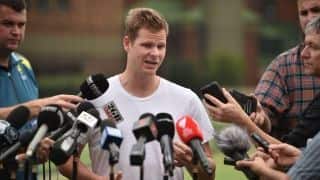