As Rahane pointed out, it is vital that he and the rest of India s batsmen support their bowlers.

The series is up for grabs as India and Australia contest the third Test – known famously as the Boxing Day Test – from December 26 on a Melbourne Cricket Ground surface with a history of pushing bowlers to their limits.

India edged Australia in Adelaide, then surrendered in Perth where once again they misread the conditions and erred in picking their team. Sunday s revelation from head coach Ravi Shastri that the allrounder Ravindra Jadeja carried an injury to Australia and was not fully fit when named in the 13 for the Perth Test again throws up questions of how the BCCI s medical staff is handling its cricketers. On top of that, their openers are in a rut and the situation demands changes.

As Ajinkya Rahane pointed out on Monday, it is vital that he and the rest of India s batsmen support their bowlers. Virat Kohli s tactics were widely criticised after India opted for a four-man pace attack after losing there Perth Test, and with R Ashwin, ruled out for the 3rd Test as well owing to side abdominal strain, India have opted to to go with Jadeja for the MCG Test. ALSO READ: Ajinkya Rahane confident of scoring a 100 or 200 at Melbourne

As in Perth, Australia s bowling attack remains the major obstacle for India to overcome as they seek to make it 2-1. The Ashes-winning quartet of Mitchell Starc, Josh Hazlewood, Pat Cummins and Nathan Lyon has kept India to totals of 250, 307, 283 and 140. Of that 250 in the first innings in Adelaide, 123 came from Cheteshwar Pujara. Subtract Kohli s first-innings 123 from that 283, and ten others contributed 160 runs. ALSO READ: Was surprising to see India not play a spinner in Perth Test: Kumble

Buoyed by their victory in Perth, Tim Paine s team will back themselves to go two-up.

Weather: Sunny with a high of 26 degrees

Justin Langer, Australia s coach, termed Mitchell Marsh an attractive commodity as the home team mulled playing the allrounder ahead of Peter Handscomb, who has scores of 34, 14, 7 and 13 in the series. Marsh has been confirmed to play at the MCG at the expense of Handscomb. The much-scrutinised MCG surface has been a difficult place for bowlers in recent months, but wore a green tinge on Monday to give Langer the chance to consider Marsh as the seam-bowling allrounder and his ability to play spin.

The long awaited debut for Mayank Agarwal is all set, with both KL Rahul and Murali Vijay (49 and 47 runs respectively in four innings) dumped for the third Test. Hanuma Vihari is set to open the innings with a fit-again Rohit Sharma back at No.6. Jadeja comes in place of Umesh Yadav.

– Australia s pace trio of Starc, Hazleood and Cummins have bowled 31 overs less than India s have in four innings.

– Rahane has gone 25 innings since his last Test century, against Sri Lanka in August 2017. Since then, he has managed to reach 50 only only five times.

– Two of the past four Tests at the MCG have resulted in draws. In three Sheffield Shield matches played at the MCG this season, 2777 runs have been scored and 91 wickets have been taken.

In a perfectly balanced side, you’ve got someone who can bowl some overs. Mitch becomes an attractive commodity on a wicket (that) unlike Adelaide and Perth although there’s a bit of moisture in it, we also know the history of it. – Langer

It will come, I am really sure that it will come in this match. The way I am batting, with the the mindset of counter-attack, definitely (I will score) a 100 or maybe 200. – Rahane 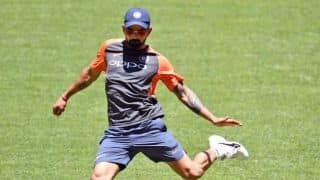