Bowling at the death is what Siddle believes he can offer a unique skill with.

Ahead of his first ODI opportunity in eight years, the veteran Australia pace bowler Peter Siddle says he feels like a young bloke getting his first call-up and hopes to push for a place at the 2019 ICC Cricket World Cup.

Siddle, 34, has not played an ODI since November 2010 but was recalled to the squad this week with the national selectors dropping Andrew Tye and Nathan Coulter-Nile and resting the pace trio of Mitchell Starc, Josh Hazlewood and Pat Cummins keeping mine the home Tests versus Sri Lanka ahead of a series with Pakistan and then the World Cup followed by the Ashes.

“It’s pretty amazing,” Siddle told cricket.com.au. “I never really thought it’d come. To get another one-day game hadn’t even crossed my mind. I had my 34th birthday a few weeks ago and to have not played for a number of years, it’s amazing to potentially get that opportunity again. I’m just as amazed as a young bloke getting his first call-up, that’s what it feels like. It feels like I’m starting all over again, so I’m very thankful.”

Mostly regarded as a specialist Test bowler, Siddle played a starring role in Adelaide Strikers 20-run victory over Sydney Thunder last week with figures of 3/20, which earned him the Man-of-the-Match award. After the win, he spoke of his desire to play T20Is for Australia, and now that he s back in the ODI squad he hopes press for selection for the World Cup with the defending champions.

In particular, bowling at the death is what Siddle believes he can offer a unique skill with.

“I know I’d worked hard and tried a lot of things to develop my white-ball game, but that was pretty much on the basis of trying to perform well for Adelaide, not so much thinking the one-day chance would come, he said. “The skills I’ve worked on over the last 12 months for the Strikers have set me up to at least have a crack at it. Now the position I’m in the ball’s in my court now to try and perform and take this opportunity that I’ve got.

“If that means I get a shot at a World Cup, I’d love to. I’ve played in most things I could have through my career, and probably the one thing I haven’t played in is a World Cup. 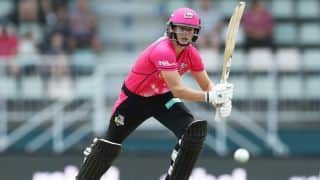