The Indian pace trio Bumhrah, Sharma, Shami played a vital role in the first Test at Adelaide, claiming 14 of the 20 wickets amongst themselves.

“Certainly, from seeing the Indian attack in England and at the Adelaide Oval, Bumrah (Jasprit), Shami (Mohammad) and Sharma (Ishant) will be going to bed tonight thinking thank you,” Vaughan told Foxsports on the eve of the Test.

The Indian pace trio Bumhrah, Sharma, Shami played a vital role in the first Test at Adelaide, claiming 14 of the 20 wickets amongst themselves.

“They clearly need a pitch that they feel they can get at the Indian batsmen, but I just look to the game at Adelaide Oval, it wasn’t the pitch, it wasn’t anything to do with the conditions. It was just that India produced more discipline for longer periods.”

ALSO READ: WACA curator on green top: We are trying to produce bounciest wicket we can

Vaughan also said Mitchell Starc‘s performance dipped in the second innings though he ended up taking five wickets in the game.

“Unfortunately, for Australia, one of their quicks didn’t quite get the radar right and I would say that went a long way to India just nipping over the line in that Test match.”

India named their 13-man squad for this Test, with Ravichandran Ashwin and Rohit Sharma ruled out owing to injury concerns. There is a chance that India will go in with a four-pronged pace attack for only the third instance in their Test history, after Johannesburg (2018) and Perth (WACA, 2012), but Vaughan believes the consistency of a finger-spinner Ravindra Jadeja could be helpful.

“Jadeja’s a wonderful cricketer as well. He’s someone that I’d want in the team. He bats well, he’s an incredible fielder, he will create something in the field and with his bowling he’s just going to keep bowling,” Vaughan said.

“You look at your three quicks and Ravi Jadeja, as a captain I look at it and you think you’ve got an end tied up against left and right-hand, and if it does start to spin like it did in a Shield match a few weeks ago, he’ll come into his own,” he added. 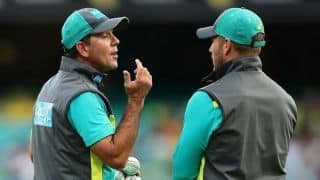