Ponting advised the Aussies to build on their confidence after the series-levelling victory, their first since the ball-tampering scandal in March this year.

Perth: Before the second Test at Perth’s new Optus Stadium, former Australia captain Ricky Ponting predicted that the venue will suit the hosts more than their fancied opponents. Call it fate or whatever you want to, Australia sealed an emphatic 146-run victory on the fifth and final day against India to level the four-match series with the two Tests to go at Melbourne (December 26) and Sydney (January 3).

After the defeat in Perth, Ponting believes India’s problems have now increased manifold as compared to the hosts. “I compared the two teams at the start of the series and I didn’t think India could win here just because of the frailties of their batting and I think that’s been highlighted this week,” Ponting was quoted as saying by cricket.com.au on Tuesday.

“They’ve had to call in another opener [Mayank Agarwal], they’ve brought in another allrounder [Hardik Pandya] as well to try and bolster that middle order. They’ve got as much on their plate as the Australian boys have, if not more now that they’ve lost this game. There is a lot of uncertainty around their group and they haven’t got long to turn things around.”

He also advised the Aussies to build on their confidence after the series-levelling victory, their first since the ball-tampering scandal in March this year.

“Just not relax. They’ve set a bit of blueprint this week (of how to beat India) with the way they’ve played. They just have to build on that now. There’s no doubt with one win a bit of belief comes but they can’t just rock up in Melbourne and expect India are going to play like they did here,” he said.

“I still think both teams have been a long way off their best because their batting has not been anywhere near as good as what the bowling side of things have been.

“If you think about the MCG and SCG, they are (venues with) conditions that will suit the Indians more than Adelaide and Perth.

“The Aussie boys will have their work cut out, but as long they play the brand of cricket they know that they can play – and I think they showed that (with) some great aggression this week, I hope that continues for the next couple of weeks – if they can do that then I think they’re going to be hard to beat.”

Meanwhile, Ponting expects the pitch at the Melbourne Cricket Ground which was deemed ‘poor’ by the ICC after an Ashes draw, to be much different.

“We’re not really sure what we’re going to get out of the surface, ” he said.

“One thing it won’t be, it won’t be like it was last year. I think they got a pretty loud and clear warning as to what is demanded of the pitch down in Melbourne. Reading between the lines I think they have been experimenting with the amount of grass and moisture they’ve left on it for the Shield games.

ALSO READ: Won’t sit back and be walked over if similar situation arises: Paine on exchange with Kohli

“I think Melbourne will have a little bit of grass on it and moisture and then flatten out to be a pretty good one after that.” ‘Disrespectful’ Virat Kohli gets away with more than most cricketers: Mitchell Johnson 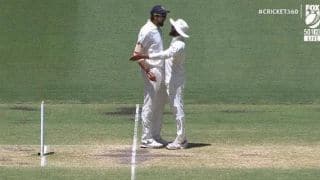