The left-armer has a history of back problems and Australia are likely to adopt a cautious approach.

Australia are unlikely to risk playing Jason Behrendorff in the third and final ODI against India on Friday, with the Western Australia fast bowler managing a sore back.

Behrendorff, who returned to limited-overs cricket last summer while putting his first-class career on hold, is likely to be replaced by Billy Stanlake at the MCG.

Jason s being monitored, Australia captain Aaron Finch said Thursday. He s had back issues in the past so it s about managing him through this series and further forward. We re going to have a chat about that and speak to the medicos. (ALSO READ: Rejuvenated India meet desperate Australia in winner-takes-all ODI)

The recalled offspinner Nathan Lyon has gone wicketless in the series and could be swapped with Adam Zampa with the 2019 ICC Cricket World Cup looming. Finch praised Lyon s bowling even though he had not struck in two ODIs. (ALSO READ: Improve or we won t see you again: Healy’s warning to Australia bowlers)

I think he s been really impressive, Finch said. In Adelaide, there s obviously a short square boundary and I thought he bowled really well, quite defensively his role was pretty important.

Anytime the ball has been tossed up, Rohit Sharma hit a couple (of boundaries) off him in the first game and Dhoni the other day. Obviously not getting a wicket, he d have liked a bit more return for that. When he keeps bowling that well, he will get rewarded eventually. 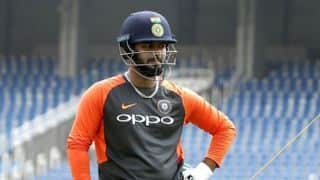 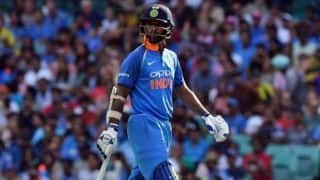