Kane Richardson has been called into the Australian squad as cover.

Australia have confirmed two changes to their XI for the third and final ODI against India on Friday, with the stiff Jason Behrendorff rested to manage a sore back and Nathan Lyon benched after two wicketless outings.

Behrendorff, who returned to limited-overs cricket last summer while putting his first-class career on hold, has been replaced by Billy Stanlake while Adam Zampa gets a chance in Lyon s place.

Kane Richardson has been called into the Australian squad as cover and will be available for the MCG game.

Zampa, 26, has played an ODI in November while Stanlake has not featured in the format since June. 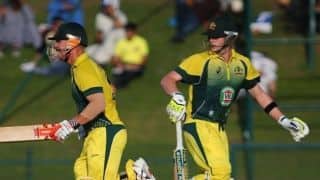