Rohit has earned his place in the Test line-up on the back of some remarkable performances in the limited overs format.

The Indian team named their 12-man squad for the first Test against Australia beginning on Thursday at Adelaide. Bhuvneshwar Kumar was left out as the think tank opted for Ishant Sharma, Mohammed Shami and Jasprit Bumrah. Ravichandran Ashwin was the specialist spinner. In the batting department, Rohit Sharma and Hanuma Vihari will ostensibly be vying for the No. 6 spot. How good are they? Let s take a look.

The case for Hanuma Vihari

Andhra batsman Vihari scored a half-century on debut in the first innings against England his knock studded with seven boundaries and one six but followed it up with a duck in the second dig. However, he could have the edge given his contribution to the bowling department. In England he picked up three wickets in his 9.3 overs in the second innings. Before hopping over on to Sydney, Vihari smashed 86 and 51 for India A in New Zealand.

ALSO READ: IND A vs NZ A: Shaw, Vijay and Vihari hit fifties on final day of draw

In the only warm-up match ahead of the series opener of which one day was washed out, Vihari scored 53 and 15, batting ahead of Rohit, and rolled his arm bowling 12 overs. After the England tour, Vihari was left out for the subsequent two Tests against West Indies before earning his place back in the side for the marquee tour to Australia.

The case for Rohit Sharma

Rohit has earned his place in the Test line-up on the back of some remarkable performances in the limited overs format. In 2018, with 967 ODIs runs, Rohit averages almost 70. In T20Is, he has 586 runs in 18 matches at an average of 32.50. Rohit played the last of his 25 Tests in January against South Africa at the Centurion where he scored a paltry 10 in the first innings and added 47 to his tally in the second essay.

Rohit was left out of the Test set up following a dismal series with the bat in South Africa where he notched 78 runs in four innings at 19.50 before earning a recall for the Australia series. Overall, in Tests, Rohit averages 39.47.

So, who do you think can make the spot? We let you decide 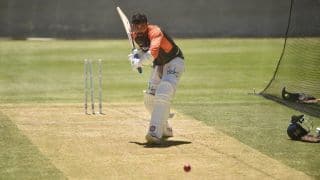