Kohli is the first Indian captain to win a Test and ODI series in Australia in one tour.

Virat Kohli on Friday became the first Indian captain to win a Test and ODI series in a single tour of Australia, following a seven-wicket victory at the MCG which sealed the series 2-1.

After the win, a beaming Kohli credited the three stars of the day – the legspinner Yuzvendra Chahal, MS Dhoni and Kedar Jadhav. Chasing 231 after Chahal’s career-best 6/42, India lost Rohit Sharma and Shikhar Dhawan early and then Kohli for 46, but a 121-run stand between Dhoni – dropped first ball – and Jadhav took them home in 49.2 overs.

“We have been here for a long time. It’s been an amazing tour for us,” said Kohli. “We drew the T20 series, won the Test and the ODI series. If someone gave me these results before the tour I would have taken it with both hands. I am really grateful and proud of the side. It was a collective effort. We are feeling confident and balanced as a side with the World Cup in mind. Few games against New Zealand and few more back home to strengthen the areas that we need to work on as a team.

“It wasn’t a great wicket to bat on, so we had to take it deep, but they [Dhoni and Jadhav] were professional in getting the job done. We were a bit nervous but two set batsmen in knew exactly what they wanted to do. We wanted to get in a good combination. We wanted to give Kuldeep a rest and we don’t want to be too predictable as well. Chahal came in and bowled beautifully … 6/42 was magnificent. Kedar with the bat and ball is always handy.” 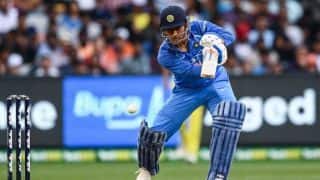