Day one of the second Test at Perth’s new Optus Stadium witnessed a crowd of 20,746 with the figure slipping below the mark on the second day.

Perth: The Western Australia Cricket Association (WACA) chief executive Christina Matthews has blamed Cricket Australia for poor turnout in Perth and said that international cricket was “on the nose” with fans, the situation being made worse by Cricket Australia.

According to a report in ESPNCricinfo on Sunday, day One of the second Test at Perth’s new Optus Stadium witnessed a crowd of 20,746 with the figure slipping below the mark on the second day.

“I don’t think it’s the team, I think Australian cricket as an entity is on the nose and a little bit of trust has been lost,” Matthews told SEN radio.

“What happened in South Africa was kind of an insult to everybody and how they feel about the game. We follow that up a few months later with the cultural review and let’s say the lack of foresight on Cricket Australia’s part to see how the public was going to react to that. You live and learn. Don’t forget we’ve got a World Cup and an Ashes series coming up in the winter and a reset in that sense.

“No doubt when we were planning for this a few years ago we would have hoped for 30-35,000 first day crowd, but we didn’t expect the upheaval that was going to happen in cricket over the last nine months. That’s obviously had an effect on Australian cricket and we know that because we know how well the Big Bash League is doing in cricket sales and corporate hospitality – it is smashing everything.

“It’s not happening in Australian cricket so there’s obviously been an impact, but I think as the team progresses, the result in Adelaide got people a little more sentimental about the team, and as the team improves that will come back again.”

Meanwhile, Matthews is also been involved in the rehabilitation of Cameron Bancroft, one of the three suspended in the ball-tampering scandal. Bancroft, contracted with Western Australia, will be eligible to officially play on December 29.

“We didn’t want it to be a ‘ticking the box’ exercise and do a hundred hours at a junior club and there you go. We wanted it to be a learning experience for him, and to be fair to him he wanted it to be a productive experience as well, so it was exciting last week when I could write to Cricket Australia and letting them know that Cameron had completed his community hours. He had to do a hundred and he did at least double that,” Matthews said.

“So, he did things like working with kids with cancer to kids at schools in breakfast clubs in disadvantaged areas, he did some work with our diversity groups at the WACA junior cricket disabled cricket things like that and a whole lot of variety of things.”

“As each day in December passes he’s smiling broader and broader. And he’s started doing a few more public appearances, so he was a guest at a breakfast this morning and he’s happy to talk openly about it because he’s learnt so much himself.

“He’s probably had an easier road than the other two because he’s been very set and we’ve been very set in how to go about it. So, he hasn’t chased other tournaments around the world. He’s worked with the squad and to be fair he’s had a contract so he’s had obligations as well.” 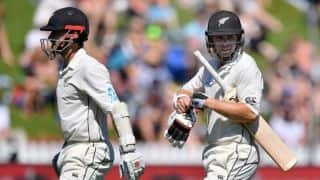