Assessing the current Australian team, Kumble asserted that a spinner was a must.

Former India captain and coach Anil Kumble believes that the current team management should have played a spinner in the recent Perth Test and has expressed surprise at the situation regarding Ravindra Jadeja.

Poor injury management continues to dog the Indian cricket team, with Sunday s revelation from head coach Ravi Shastri that the allrounder Ravindra Jadeja carried an injury to Australia and was not fully fit when named in the 13 for thePerth Test again throwing up questions of how the BCCI s medical staff is handling its cricketers.

Speaking to Cricketnext, Kumble stated that a spinner was a must in all Indian teams.

ALSO READ: A timeline of the BCCI s fitness inconsistencies

I think you need a spinner. You need the combination, because you need a bowling attack which can bowl in all conditions, he said. Because at the start of the game, unless it is a green top, unless you know that when you bowl you are going to dismiss the opposition in less than a day. Then you take a chance with four seamers. When you know that the wicket is going to remain like that throughout the Test match, then there is a possibility that you look at four fast bowlers otherwise you will always need a spinner.

It is very difficult for me to judge from this far but you know generally you try and plug all options. When you pick a team, when you pick up a playing eleven, try and take the skills of players who can probably contribute irrespective of what the conditions are, number one, he said.

Number two, if the conditions do deteriorate, do help the spinners, then you need that option. In this current cricket team, you know when I played there was Sachin Tendulkar who could bowl and pick up wickets. Virender Sehwag could run in and bowl spin. Whereas in this team, there is no one other than Hanuma Vihari and he is also part-timer. I mean he also not like a Virender Sehwag or for that matter Sachin Tendulkar who could bowl spin. So in that kind of a scenario, I am surprised that India went without a spinner.

Assessing the current Australian team, which has struggled as a collective batting unit in the absence of the banned Steve Smith, David Warner and Cameron Bancroft, Kumble asserted that a spinner was a must.

ALSO READ: Ajinkya Rahane confident of scoring a 100 or 200 at Melbourne

Look at the opposition as well. You know as an opposition, Australia hasn’t always had good results with good spinner and India has some fantastic spinners, he said. When you look at the opposition, no matter what the pitch is, you know when Australia has struggled with spin especially with this team there is not much depth in their batting line up, you know with the Aussies you would always have a spinner in your team.

In Perth, India were without the injured R Ashwin but named Jadeja in the squad of 13 for the second Test, having kept out the wristspinner Kuldeep Yadav. They opted for four pace bowlers, getting in Umesh Yadav who conceded 139 runs in 37 overs for two wickets.

In Kumble s estimation, with Ashwin unfit and Jadeja not 100% fit as Shastri revealed on Sunday, India would have held back on including Kuldeep who he felt needed an experienced spinner bowling in tandem.

If both of them [Ashwin and Jadeja] were not available then you didn’t have a choice but to go with four fast bowlers because Kuldeep requires another spinner at the other end, he said. I believe that Kuldeep requires that because he is still young and being the lead spinner is too much of a risk, but ideally you would want someone like a Jadeja or an Ashwin at the other end when Kuldeep is playing but I think Jaddu was fielding on couple of days in Perth Test so I am not sure what the extent of injury was. 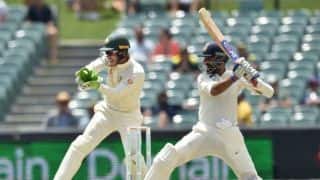