Kohli, who scored his 40th century ended up with 116 in India s modest total of 250, won the Man of the Match award.

India pulled off a narrow win in a low-scoring thriller after Vijay Shankar took two wickets and defended 11 runs in the final over to seal a memorable eight-run win against Australia in the second one-day international at the Vidarbha Cricket Association (VCA) stadium in Nagpur on Tuesday. (ALSO READ: Virat Kohli, Jasprit Bumrah star as India beat Australia in thriller)

Shankar, who had conceded 13 runs off his opening over, kept his nerves as the hosts pocketed their 500th ODI win. He (Shankar) just put the ball in the right areas. He showed great composure with both bat and the ball; a good game for him, India captain Virat Kohli said at the post-match presentation ceremony.

Kohli, who scored his 40th century ended up with 116 in India s modest total of 250, won the Man of the Match award. It felt good (40th ODI century), just a number. As long as I keep playing for India, I’m happy, Kohli said of his immaculate knock that was laced with 10 boundaries.

India were in a spot of bother at 75/3 inside the first 20 overs, but then Shankar and Kohli s 81-run partnership for the fourth wicket bailed the side out of trouble.

When I walk to bat, the situation gets difficult, I got no choice, just needed to put my head down and bat. Me and Vijay Shankar had a good partnership. I’m totally exhausted now, Kohli said. (ALSO READ: I was waiting for this opportunity: Vijay Shankar on defending 11 runs in last over)

I knew 250+ would be challenging. I was thinking about the 46th over. I was talking with both of them (Rohit Sharma and MS Dhoni). If they take wickets, we’ll be right on the game and that’s exactly what happened, the Indian captain once again lauded his bowling department.

Jasprit Bumrah, who pocketed two wickets, once again was brilliant at the death. His last over the 48th of the Australian innings yielded just one runs. He’s (Bumrah) a champion. He just turned the game around, he’s at the top of the rankings, he’s at the top of his game. So proud to have him on our side. Just to come through in games like these, gives great confidence, Kohli said. (ALSO READ: Ravindra Jadeja third Indian to complete 2000 runs and take 150 wickets in ODIs)

Talking about a low-scoring thriller, Kohli had no qualms whatsoever. I think it’s very important to look ugly at times and earn victories. There might be low totals in World Cup games as well. We will fight till the end, and tonight was an example of that. This type of pitch was tailor-made for him (Kedar Jadhav). He was keen to bowl the last over as well. He was chirping and encouraging the bowlers. He gives you 7 quality overs as well, he said. 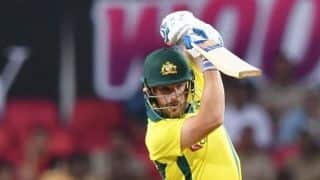 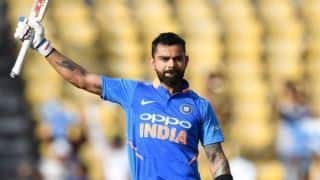