Bhuvneshwar was rested for the 2-match T20I series and first two ODIs against Australia.

Bhuvneshwar Kumar seems to share a strange relation with World Cups and like in the 2015 edition, there exists a strong possibility that he will again be cooling his heels for the better part of the upcoming showpiece.

With Jasprit Bumrah and Mohammed Shami ready to share the new ball and a seam bowling all-rounder set to be part of the playing XI, Bhuvneshwar is again likely to be confined to the benches for his second successive marquee event, starting in England from May 30. (ALSO READ: Workload management will come into effect in the second phase of the IPL: Bhuvneshwar Kumar)

In Australia and New Zealand four years ago, Haryana’s Mohit Sharma, who was bowling better at that point of time, played and the UP seamer was used in an inconsequential game against the UAE.

On the face of it, Bhuvneshwar on Thursday put up a brave front when asked how difficult it is to get in and out of the side.

“I’m not worried about who’s getting a chance and who’s not getting. More importantly, it’s about getting rest. Shami got rest in New Zealand, I got rest in this series. You want to be consistent and for that you want to be fit. That’s the reason why I took rest,” Bhuvneshwar said, his answer far from convincing. (ALSO READ: Milestones loom for Virat Kohli, MS Dhoni and others in Ranchi)

For Bhuvneshwar, the next three ODIs will be the match practice that he is looking at, as he is not considering IPL as a preparation platform.

“Not necessarily IPL, but these three matches definitely, also because we can’t take any match lightly. Obviously these are the crucial matches for us going into the World Cup.”

The Indian Premier League, for Bhuvneshwar, is more about fine-tuning skills.

“IPL is something… it’s where we polish our skills and be in form but ODI and T20I are totally different. So we are approaching these matches (ODIs) as the last before the World Cup.”

Not only Bumrah-Shami but the Bumrah-Bhuvneshwar combination has also been a successful one and he attributes the success to knowing their specific roles.

“If Bumrah is taking wickets then I can contain runs, so that there’s pressure on the batsmen. These are things which we keep working on. (VIDEO: Bhuvneshwar Kumar perfecting toe-crushers)

“Not just two of us but as a bowling unit, we keep in mind that if somebody is picking wickets, the other bowler’s job is to not give away any runs. It could be vice versa, I could be taking wickets and he could be containing.”

He has got Australia’s ODI skipper Aaron Finch out on a number of occasions and when asked about the secret behind his success, he cheekily replied: “Because he is out of form.”

With the first two ODIs of the five-match series being low-scoring ones, Bhuvneshwar knows that his batting could come in handy.

He said that he simulates match situations and works at the nets.

“In my mind, I work out situations. Like how I should play if I bat for four overs or how should I approach myself if its 10 overs. These are things I work at the nets.” 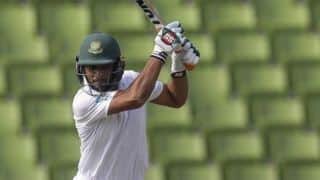