India captain Virat Kohli has won his first toss of the ongoing series – including the two T20Is – and opted to bowl in the third ODI against Australia in Ranchi.

Kohli reckoned that the dew later in the day was the key factor, and termed the surface as smoother than the one in Nagpur. India named an unchanged XI.

Kohli is chasing his 5oth ODI win as India captain, which will make him the fourth skipper after Mohammad Azharuddin, Sourav Ganguly and MS Dhoni to have as many victories to his credit. Kohli also needs 75 runs to surpass Rahul Dravid as India’s third-highest run-getter in ODIs. (UPDATES: INDIA VS AUSTRALIA, 3rd ODI)

India need a win to wrap up their fourth straight bilateral ODI series and fifth competition in a row if you count the Asia Cup while Australia are in a must-win situation to avoid a seventh consecutive series defeat. (SCORECARD)

Nathan Coulter-Nile is on his way back to Australia for the birth of his second child, which means that his Western Australia team-mate Jhye Richardsons slots in.

To claim the series, Aaron Finch s team has to win all three remaining ODIs, a feat no Australian side has achieved in India since 2003, the year Ricky Ponting s World Cup winners lifted the TVS Cup. (READ: Milestones loom for Virat Kohli, MS Dhoni and others in Ranchi) 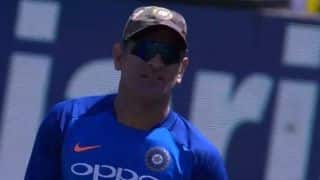 Why is Indian team wearing camouflaged caps in Ranchi? 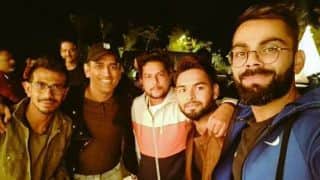