Shikhar Dhawan roared back to form with an excellent century to power India to a huge 358/9 against Australia in the fourth ODI in Mohali on Sunday. (4th ODI: Full Scorecard)

Dhawan struck his 16th ODI century leaving behind a brief slump that saw him aggregating 69 runs across six innings. The left-handed opener scored a career-best 143, the venue of his explosive Test debut when he slammed a record-breaking 187, also against Australia in 2013.

Together with Rohit Sharma, who missed out on his century by five runs, Dhawan led a bright start with the pair adding 193 runs after captain Virat Kohli opted to bat at the Punjab Cricket Association Stadium.

The Australian pacers tested the duo early on but on a belter of a track there was little they could have done as the pair of Dhawan and Rohit settled in nicely.

While Rohit typically shaped his innings, taking his own time before bringing out the big shot, Dhawan looked intent on leaving behind the patchy run that had even raised doubts over his inclusion for the squad for the World Cup.

However, he has put those concerns firmly to bed with an strokeful knock, hitting 18 fours and three sixes, scoring at a strike-rate of 124.35.

Rohit holed out to midwicket fielder as he pulled a shot one from Adam Zampa to walk back on 95, an innings that featured seven fours and two sixes.

His dismissal brought much needed relief for the tourists who had made two changes to their squad. Marcus Stoinis was ruled out due to a thumb injury, replaced by Ashton Turner while Jason Behrendorff replaced Nathan Lyon.

The absence of Stoinis and Turner’s inability to bowl due to a shoulder issue limited Australia’s options for a fifth bowler. Glenn Maxwell and captain Aaron Finch himself shared the responsibility but both proved expensive. In eight overs, Maxwell leaked 61 runs while Finch bowled three overs for 22 runs with neither finding any success.

Rohit’s dismissal in the 31st over didn’t result in any change in momentum with Dhawan pushing India forward alongside the returning KL Rahul (26) who was promoted to bat at No. 3 spot ahead of Kohli. The duo added 61 runs for the second wicket, a partnership that was dominated by Dhawan.

Pat Cummins (5/70) was the pick of the Australian bowlers, finishing with a five-wicket haul with only Zampa escaping without getting thrashed with 1/57 from his 10 overs.

While Dhawan and Rohit stole the show early on, Jasprit Bumrah managed to hog some of the spotlight as he ended Indian innings with a last-ball six off Cummins drawing loud cheer from the home dressing room. 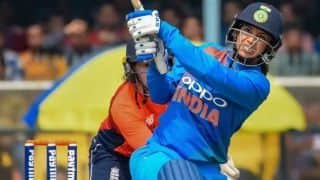