D'Arcy Short is aiming to improve his bowling tobecome an indispensable part of Australia's limited-overs setup.

D’Arcy Short’s exploits with the bat need no introduction but the big-hitting Australian is also attracting attention for his effective left-arm spin bowling that came to the fore in the recently concluded Big Bash League.

Short, who finished the BBL as the season’s highest run-getter with 559 runs, also took 10 wickets while turning out for table-toppers Hobart Hurricanes. He’s in Australia’s touring party that landed in India on Monday for a limited-overs tour.

“If I can give two or three overs or even four or five in one-day cricket then it’s always going to help my selection in the end and hopefully it goes in my favour,” Short was quoted as saying by Cricket.com.au.

Short’s bowling record in international cricket isn’t much to right about but he surely is eyeing to better it and become an indispensable part of Australia’s limited-overs setup. Helping him in his endeavour is spin coach Sridharan Sriram.

“Just to keep things simple and keep my momentum going forward and energy through the crease,” Short said of Sriram’s advice to him. “I did a lot of work with him in the A tour in August and September. That was good then and I’ve done a bit of work with him yesterday and today, just refining things and getting a little bit better.”

Sriram feels Short bowling more in Australia’s T20 competition is a good sign for the national team. “We’ve seen in the Big Bash, he’s bowled a lot more than the previous years which I think is a very good sign for our cricket team going forward. He’s come a long way. One of the main things we talked about was aligning his technique and then consistency of length. In international cricket it goes without saying, consistency of length is going to be very, very important.

He added, “If he can do that and spin the ball both ways, which he does, when he’s bowling at his best I think he offers a lot to the team along with his batting.”

Australia and India lock horns in the first T20I on Sunday night in Visakhapatnam. 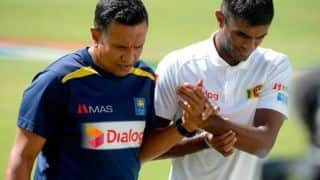