Glenn Maxwell feels that in ODIs, he will find it difficult to make a difference at No 7 in most occasions and a promotion up the order may just suit his game.

Maxwell bats at number 7 in ODIs and would happily take a promotion in the five-match ODI series starting in Hyderabad on March 2. (ALSO READ: Australia outplayed us in all departments Kohli)

The 30-year-old slammed his third T20 international hundred on Wednesday night, an unbeaten 113 off 55 balls, to blow away India and win the series 2-0.

“It’s not easy to just come here and go like that because the ball is a lot older, the wicket’s gone a lot quicker here. Even tonight at the end of the game, the wicket’s sort of drying out and there was scuffs all over it,” he added.

Maxwell believes that in ODIs, he will find it difficult to make a difference at No 7 in most occasions and a promotion up the order may just suit his game.

“In one day cricket, it’s not as easy to go at the end. So it would be nice to bat higher up but it depends on what happens in the top four or top five. If the opportunity does come up, I’d like to take,” he said.

Maxwell was on a rampage, hitting bowlers to all corners of the park for nine sixes and seven fours. However, he felt that he did not take any needless risk.

“I think it’s just got to be about picking your moments. I think a little bit of it is that I have to go hard but I think I had been just picking off balls I can hit the boundaries in.

“Like today, I don’t think I took too many ridiculous risks and I feel I read the game really well and was able to hit the ball in areas where the fielders weren’t at all. There’s not many times I hit the ball straight over a fielder’s head but just place it in the gap and I feel that’s okay for me.

“When I had a successful innings, if I am mistiming and it’s still falling in the gap but I have gotten in control and I really had a good read of the game and I was just one step ahead,” said Maxwell.

He even negotiated pacer Jasprit Bumrah well to stay unbeaten.

“I was always trying to attack him. We needed 44 off the last four overs and he came back on. I suppose it was a key over. If that only went for four or five, suddenly you need 13 an over. And it only takes six good yorkers from him to push that up to 18-19. That can be quite difficult to get in the last two overs, or the two other overs.

Maxwell was well aware of the threat that Bumrah could pose.

“So I was just hoping he missed a couple of times and wanted to pounce on that. He’s done me a fair few times in T20 cricket to his credit. I have sort of changed my approach to him a little bit. Been able to wait for a ball that’s slightly off and capitalise on that.

“I was able to get him for two boundaries in that over, and keep the run rate in check and I was able to target Siddarth next over and then we only needed 14 off 12 balls.”

Maxwell was batting in such a zone that he did not even feel the need to change his bat.

“I have been saying in the change room I’ve got the best bat ever. It’s being held together by tape at the moment. Inside edge has been pretty badly hammered. There was a bit of it coming off in the third last over. They told me to change it and I was just like “no, not changing this bat, it’s the best bat ever’.”

“I have been here a lot of times but haven’t felt a lot of success. In 2013, we had that amazing series, record amount of runs and last game here Rohit got a double hundred. We tried to chase 380 and I think Faulkner got a 100 in that game but

“That was one of the best series played here and to not win that is probably a sign of we played such good cricket in that tour and India still beat us and that’s how difficult to win here. So to win here in the first two games of the tou, that starts really well,” he added. 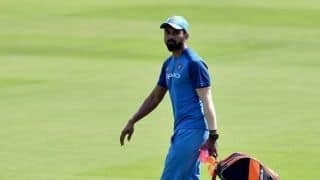