Rishabh Pant, who is yet to play a game in the five-match series, will replace Dhoni for the remaining two ODIs on March 10 and March 13 at Mohali and Delhi respectively.

Mahendra Singh Dhoni is all set to be rested for the last two ODIs against Australia, batting coach Sanjay Bangar confirmed on Friday after India lost the third ODI by 32 runs. Rishabh Pant, who is yet to play a game in the five-match series, will replace Dhoni for the remaining two ODIs on March 10 and March 13 at Mohali and Delhi respectively. (ALSO READ: Khawaja, Finch stand trumps Kohli 123 as Australia stay alive)

India will also keep an eye on fast bowler Mohammed Shami, who suffered a minor injury during the third ODI in Ranchi. Shami was hit on his leg by a straight drive and was forced off the field, but soon returned to complete his quota of overs.

Captain Virat Kohli stressed that there will be a few changes made in the squad with the ICC World Cup 2019 approaching near. However, he said that the mindset of winning games despite the changes will not change. (ALSO READ: We don’t want to see anymore collapses, says Virat Kohli after Ranchi defeat)

“We will have a few changes in the next couple of games. We have to figure out what those changes are. But the idea is to go out there and win matches and take a lot of pride in winning games for the country. That mindset will not change. We will have a few new faces and they will have to make the most of their chances because there is a World Cup coming and everyone wants to be on that flight,” said Kohli. India lead the series 2-1. 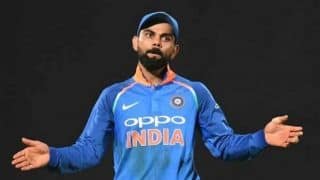