Fletcher was seen having an ‘animated’ discussion ahead of the team’s opening tie against Australia.

India coach Duncan Fletcher, who is known for his usual calm approach with the players and getting involved deeply into matters only when it is absolutely necessary, was seen having an ‘animated’ discussion ahead of the team’s opening One-Day International (ODI) against Australia at the Melbourne Cricket Ground (MCG).

According to The Indian Express, the coach seemed lost in thoughts as the team trained for the second ODI of the tri-series. India captain Mahendra Singh Dhoni, who was bowling, brought back Fletcher’s concentration, after which he got very active with the Indian cricketers.

Indian selectors Vikram Rathour and Roger Binny joined the session as Fletcher had a chat with them. The Indian coach then spoke with almost every cricketer, spending considerable time with each one of them.

Fletcher spoke with Suresh Raina, Ambati Rayudu and Ajinkya Rahane after their batting stints and even explained the foot movement in details to the tail-ender Mohit Sharma. Dhoni walked out of the training session but Fletcher continued talking to Kohli, the new Test captain.

The 66-year-old Zimbabwean has received flak for India’s poor performances overseas in Test cricket. His contract is ending post the upcoming ICC Cricket World Cup 2015, and by the look of things, it will be very unlikely that the Board of Control for Cricket in India (BCCI) extends his contract. 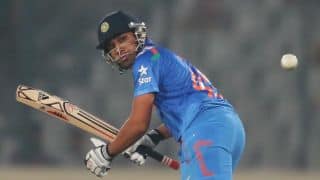