Australia are chasing 268 to beat India in the 2nd ODI at the MCG.

Australia have lost the wicket of David Warner in the second One-Day International (ODI) against India in the tri-series encounter at the Melbourne Cricket Ground (MCG). Australia are 51 for one in the 10th over and are chasing 268 to win this game. Warner had moved to a good start when he played one high in the air. He was caught by Suresh Raina at cover. Umesh Yadav got the wicket.

Warner was pulling all the short deliveries coming his way. He was dominant and helped Australia get off to a good start. At the other end, Aaron Finch is also in dominating form and that has ensured that Australia have had a very positive start to this run-chase. Shane Watson has walked in to bat. 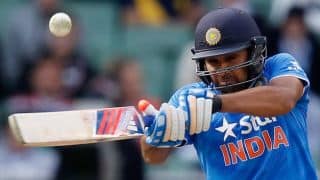