India and Australia will play the final leg of the tour at Hyderabad on October 13.

For the first time in the ongoing limited-overs series, Australia beat India in all the departments. In absence of Steven Smith, David Warner led the struggling team to an emphatic victory. Australia levelled the three-T20I series 1-1.

On a green-layered pitch, Bhuvneshwar Kumar opined that things were not going the right way for India. The India batting line-up failed to put up a good show as the wickets kept tumbling at regular intervals. Bhuvneshwar claimed it was a difficult pitch to bat especially with the rain looming around.

India finished with a below-par score of 118. Australia too lost both openers early. Since then, the spinners leaked too many runs and failed to sustain the pressure on the Australian batsmen. While addressing the reporters after the match, Bhuvneshwar explained the challenges India faced, It was a tough wicket for batting. Australian bowlers made the most of the wicket. We tried our best to take initial wickets. If you have to win the match, you have to keep taking wickets especially in the middle overs which we couldn’t do. I would say they bowled better than us.

Bhuvneshwar also praised the main catalyst of the Australian innings, Jason Behrendorff, who registered figures of 4 for 21. Behrendorff triggered the initial collapse of the Indian batting line-up. He first removed Virat Kohli and Rohit Sharma in the opening over. It was followed by the wickets of Shikhar Dhawan and Manish Pandey.

Talking about Behrendorff s performance, the Bhuvneshwar added, He [Behrendorff] bowled really well. He made full use of the wicket. It was the perfect kind of wicket for the line and length he bowled. You need to be bit fortunate to get three or four wickets in the T20s. Rohit Sharma’s wicket and Kohli’s wicket were the crucial point for us, in the first over itself.

Unlike Behrehdorff, who bowled all his four overs at one go, Bhuvneshwar and Jasprit Bumrah bowled just 3 overs apiece at the start of the second innings. When Kohli decided to bring the spinners, Moises Henriques and Travis Head had a feast coming up with an unbeaten 109-run stand to see Australia home.

That is something part of a strategy… what the captain is thinking, what he wants to do. He made us bowl three overs each in the Powerplay and we took a wicket each. But that was his [Virat Kohli] thinking. We can’t really say we could have bowled the way we began, concluded Bhuvneshwar.

India and Australia will play the final match of the series at Hyderabad on October 13. 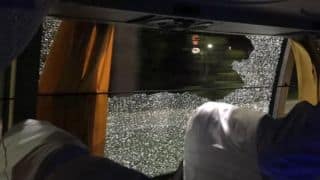