India vs Australia, 2nd Test: Australia are hoping to chase as little as they can in their fourth innings against India on a difficult pitch, opener Matt Renshaw said on Sunday.

Bengaluru: Australia are hoping to chase as little as they can in their fourth innings against India on a difficult pitch, opener Matt Renshaw said on Sunday, adding that the touring side were content with having batted for the entire second day. Australia, up 1-0 after their 333-run triumph in the series opener in Pune, scored only 197 runs on the second day at the M Chinnaswamy Stadium but took a vital first-innings lead of 48 by the close of play with four wickets in hand. The Bengaluru pitch is providing inconsistent bounce and turn for the bowlers. India were bundled out for 189 in their first innings and a bigger first-innings lead will only boost the touring side’s confidence. FULL CRICKET SCORECARD: India vs Australia, 2nd Test at Bengaluru

“Hopefully, not too many [to chase] because we know that the fourth-innings chase is going to be quite hard out there,” Renshaw, 20, said. “Hopefully we get a substantial lead out there and the bowlers can do a successful job, like they did in the first.” Off-spinner Nathan Lyon took eight for 50 in the first innings for the best figures by an overseas bowler as India suffered their third consecutive batting meltdown in the series after being all out for 105 and 107 in Pune. Full Cricket Updates, India vs Australia 2017, 2nd Test, Day 2

The touring side have handled the conditions much better and are 237-6 in their first innings, aided by half-centuries from Renshaw and Shaun Marsh. Renshaw, who also scored a fifty in the first innings in Pune, said the Bengaluru pitch was more challenging than in the first test, where the ball just turned sharply. India vs Australia, 2nd Test: Cheteshwar Pujara defends struggling hosts

“It was really challenging to score off both the quicks and the spinners. It was just a grind,” said Renshaw, who was out to left-arm spinner Ravindra Jadeja for 60. “But as I’ve said, we just needed to bat the whole day and we’ve managed to do that. I think every run is vital and we sort of felt like we were just about to get on top of the game when I got out so it was quite frustrating from that point of view.” IND vs AUS, 2nd Test, Day 3 preview: Kohli’s men hope to fall on right side of luck

It was an engrossing day of cricket with both teams trying to seize control in front of a big Sunday crowd and a lot of words were exchanged in the first session between India’s fielders and Australia’s batsmen. India captain Virat Kohli and his Australian counterpart Steve Smith were constantly talking to each other, forcing the umpires to intervene and calm things down.

“There was a bit of talk but I think that’s because they’re trying to unnerve each other [Smith and Kohli] and get under the skin,” Renshaw said. “But it’s all good fun… good contest out there. I was just trying to enjoy it and trying to laugh at what he [Kohli] was saying because some of it was quite funny.” 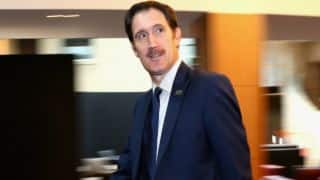 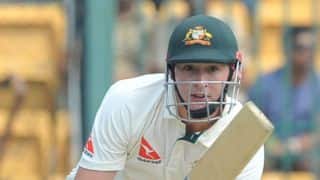