Murali Vijay was dropped twice during his innings.

Murali Vijay went past 2,000 runs in Tests on Day One of the second Test between India and Australia at The Gabba, Brisbane. Vijay and Ajinkya Rahane put on a stroke-filled 100-run partnership as India piled on the runs. Vijay scored his fourth century against Australia and fifth overall after being dismissed for 99 in the second innings of the previous match. Vijay finally got to three figures with a couple of boundaries off Shane Watson. Earlier, Virat Kohli was out for 19 as Josh Hazlewood picked up his second wicket when he induced an outside edge from Kohli which was duly snapped up by Brad Haddin. Ajinkya Rahane walked in at No. 5 for India.

Cheteshwar Pujara was Josh Hazlewood’s first Test wicket after he was wrongly given out caught behind by Brad Haddin after the ball bounced off his helmet. Murali Vijay scored his third half-century in as many innings. Vijay looked secure right from the start, and was involved in India’s first overseas fifty-plus opening stand since 2011. Vijay and Pujara were the batsmen at the middle when India crossed to three figures. 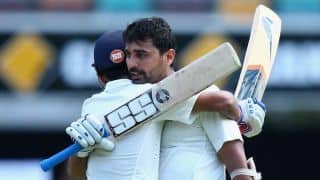 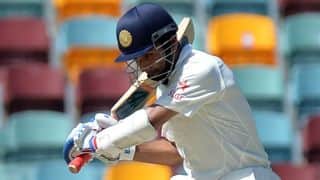