Each of Josh Hazlewood's three Test wickets so far have been caught by Haddin.

Brad Haddin took his fifth catch to dismiss Ajinkya Rahane for 81 on Day Two of the second Test between India and Australia at The Gabba, Brisbane. All five Indian wickets to fall have been caught behind by Haddin. In fact, each of Josh Hazlewood’s three Test wickets so far have been caught by Haddin. Rahane looked good on the second morning, hitting a delectable boundary before Hazlewood’s accuracy got the better of him.

Earlier, Murali Vijay scored his fifth Test match hundred — and fourth against Australia — to guide India to 311 for four at stumps on Day One. Ajinkya Rahane was unbeaten on 75 with Rohit Sharma for company on 26 as India became only the second visiting team in history to score over 300 runs at The Gabba on Day One of a Test. 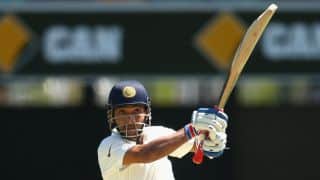 India vs Australia, 2nd Test at Brisbane, Day 2: Ajinkya Rahane out for 81 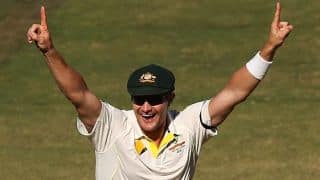