Shane Watson was dismissed thanks to a superb catch by Shikhar Dhawan.

Shane Watson was dismissed thanks to a superb catch by Shikhar Dhawan off the bowling of Ravichandran Ashwin on Day Two of the second Test between India and Australia at The Gabba, Brisbane. David Warner was dismissed for 29. Warner top-edged an attempted short-arm jab off Umesh Yadav as the ball ballooned in the air to the slips where Ravichandran Ashwin accepted the catch. 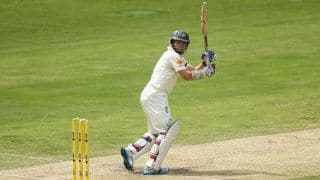