Smith scored a fifty and a hundred in the first Test.

Steven Smith scored the 10th half-century of his career on Day Two of the second Test between India and Australia at The Gabba, Brisbane. Coming into bat at No. 4, Smith survived a probing spell from Ravichandran Ashwin before lunch. He later hit a four and two sixes off an Ashwin over to boost his strike rate before getting to his landmark off the same bowler. 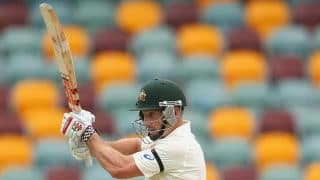