Cheteshwar Pujara went past 2,000 Test runs on Day Four of the second Test between India and Australia at The Gabba, Brisbane. Shikhar Dhawan was apparently injured in nets, so Virat Kohli walked out to bat on the fourth day. Murali Vijay was bowled by Mitchell Starc. This was the first time in four innings that Vijay failed to cross 50. Murali Vijay went past 1,000 runs against Australia. The hosts were bowled out for 505 after their lower order continued to make merry against some abysmal bowling from India. Australia managed an imposing 97-run lead on Day Three of the second Test. Steven Smith and Mitchell Johnson massacred the Indian bowling with a thunderous 148-run partnership for the seventh wicket. 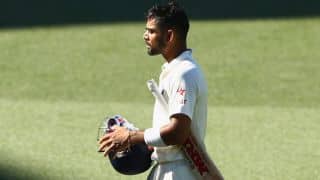